Evolution of the number of passengers and movements

In view of the pandemic situation, the year 2021 is considered as a year of decline in traffic then consolidation and recovery of the network which had been eroded over months. This required close and regular contact with the airlines as well as with the platform’s players. Despite a challenging health context, two new companies have been welcomed in Geneva : Air Serbia has introduced two weekly flights between Geneva and Belgrade, from 1 March 2021. Similarly, a new airline, AirArabia launched in June 2021 two flights per week to Casablanca. A few months later, Morocco closed its borders again applying severe measures to contain the outbreak of COVID-19.

2X/Week with Arabia (in french)

Faced with the increase in leisure traveller demand observed in spring 2021, passenger traffic reached 47% in July compared to the same period in 2019 and increased to 58% in August. The busiest week of the summer was between the 2nd to 8th August with 219,000 passengers.

The strength of the network of intra-European connections was the main factor in the rebound in activity recorded from mid-June to the end of August. The offer from Genève Aéroport, which totalled 147 destinations in 2020, decreased slightly to reach 137 destinations in 2021. The number of airlines operating to and from Genève Aéroport, amounted to 48 in 2021 (compared to 54 in 2020 and 57 in 2019).

Evolution of the number of passengers per month

All types of traffic. Passengers in millions.

EVOLUTION of the number of passengers and movements 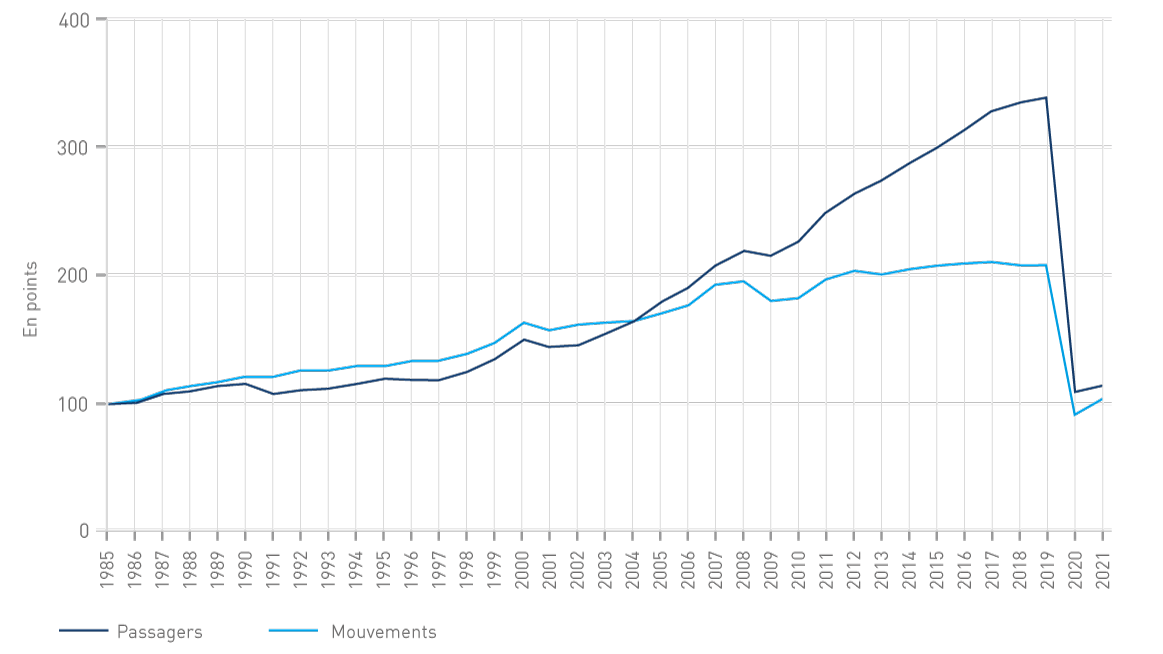 Evolution of the number of passengers by movement

During the year 2021, all destinations served from Geneva suffered a sharp drop in passengers, in particular London with -60.1%. Porto, London and Lisbon feature on the list of the most visited cities. These are followed by Paris, Madrid, Amsterdam and Istanbul (223,078 passengers arriving and departing).

Compared to 2020, the cities that have seen the strongest growth are Palma de Mallorca, Malaga, Pristina and Istanbul (+68.9% vs 2020). Turkey proved to be particularly well connected during the summer of 2021, with five airlines serving Antalya and new destinations such as Izmir (Turkish Airlines, SunExpress) and Kayseri (Tukish Airlines). This destination country, which had the wind in its sails during the summer of 2020, is once again emerging as a popular holiday spot.

Scheduled traffic by region and by country

In addition to airlines of the three main alliances, Genève Aéroport hosts several other non-alliance companies, which represent a total of 56.68% of the traffic.

Genève Aéroport was strongly affected by the UK’s decision to leave the European Union (Brexit), by the pandemic and the British specificities in terms of restrictions and quarantines. Traffic related to business and winter sports has been greatly affected in view of the particularly severe restrictions established at the beginning and end of 2021 to reach France from Genève Aéroport.

The first semester constituted the acute phase of the pandemic with only 10-15% of traffic due to severe travel restrictions (quarantines, PCR tests, border closures, etc.). When the borders opened again in the summer, family flights to the Balkans and the Mediterranean resumed strongly. Countries such as Greece and Turkey, attractive for cultural and seaside holidays, experienced a summer on par with that of 2019. Moreover, this is the first time in the history of Genève Aéroport that five companies – Turkish Airlines, Pegasus, SWISS, easyJet and SunExpress – offer an identical destination during the summer with Antalya! In the autumn, this positive trend continued, with in particular a gradual return of business travel to European cities, such as London, Amsterdam and Frankfurt.

From July 2021, Genève Aéroport was able to count on the return of long-haul flights, with Air Canada in particular – in addition to Ethiopian Airlines, Emirates and Etihad which had already returned to service. Intercontinental flights have made it possible to meet a certain demand for passengers, in particular expatriates wishing to return home, as well as a significant freight activity for the region, both for the import and export of goods.

The role of the airport remains above all to connect Geneva to the major economic and political centres in the world, whether in the Gulf, the African continent or North America, in particular to meet the expectations of international Geneva. The restrictive conditions linked to North America had led to the suspension of the route from October 2020, and continued until November 2021 when America opened its borders again to those vaccinated. This opportunity enabled Genève Aéroport to restore its entire North American service (SWISS to New York – JFK, United to New York – Newark and Washington and Air Canada already quoted), even if the frequencies remained lower than the pre-pandemic situation.

The restart of the intercontinental network required continuous efforts and coincided with the entry into service of the East Wing on 14 December 2021, the same day as the inaugural reopening flight from Geneva to New York operated by SWISS.

This long-term work to restore the long-haul network has borne fruit and now once again links Geneva to the world's major decision-making centres. The recovery of travel, particularly in connection with diplomatic and conference activities, is therefore guaranteed.

A survey of travel agency managers and travel organisers from international organisations and companies was carried out in order to assess their future needs. The need to travel was confirmed by the participants to this survey, who deemed that they are ready to resume travel, essential for negotiations and non-virtual meetings with clients. However, a new trend is emerging: direct flights are favoured in particular to minimise risks during a pandemic.

«Geneva is once again connected to the major world decision-making centres.»

Almost a quarter of the movements in Geneva last year were generated by private planes. This sector recorded more flights in 2021 than before the pandemic. This activity makes Cointrin the third European airport for private jet traffic, according to the European Business Aviation Association (EBAA).

All business segments followed this upward trend supported by positive economic conditions and the gradual re-establishment of the longhaul network, increasing connectivity to and from Geneva.

Freight transported in the hold of passenger airliners recorded the most marked development (+19.1%), followed by road freight operated by airlines (+12.4%) and that of integrators such as DHL, FedEx, etc. (+9.2%). Export, import and transit freight amounted to 37.5%, 37.7% and 24.8%, respectively, of the total freight handled at Genève Aéroport.

Emirates dominated the top of the ranking of airlines involved in air freight with a market share of 32.7% followed by Etihad (17.5%) and Lufthansa (8.3%). In terms of express delivery companies, DHL Express maintains its leading position in this segment with 84.0% market share ahead of FedEx (8.17%) and UPS (7.83%).

Cargo, primarily linked to exports (pharmaceuticals, watches, chemicals, perfumes, etc.), benefited from the good health of the Swiss economy in 2021. Freight has certainly lost a share of the market due to a lack of export capacity, in particular due to the drop number of long-haul flights. A transition period was necessary in order to be able to meet the demand. However, it is interesting to note that goods circulate more than before the pandemic, in particular with the rise of online purchases.

During the crisis, airlines opted for the latest-generation aircraft, which are more economical in terms of operating costs. Contributing to limiting noise emissions, aircraft classified in category 5, less noisy and less fuel-consuming (Bombardier CSeries, A 320neo, A 350 and Boeing 787), represented 22.3% of scheduled and charter aircraft movements against 18.7% in 2019. The best two classes (5 and 4 respectively) represent a total of 92.1% of aircraft movements in 2021.

Distribution by class of noise

From January 2021, incentive aeronautical fees in favour of latest-generation aircraft have been put in place. It is interesting to note that the incentive programme is showing its effects in 2021, with a clear impact on the strength of the progression of new-generation, less polluting and less noisy aircraft.

The Marketing and Business Development Department supported the recovery in demand for travel by launching the « J’y suis » campaign at the start of the summer. This campaign is aimed at the need to escape for holidays, leisure, to visit family and friends, while putting meaning around these trips. The campaign was deployed on various media (posters, social networks, digital campaign, etc.) focusing on direct flights from Geneva. In the summer, more than 100 destinations were on offer simultaneously.

The Take Off magazine also remains an important tool for promoting travel. Published twice a year, it is distributed at various points at the airport. For cost-saving reasons, its distribution has been halved, from 40,000 to 20,000 copies.

Since August, the e-commerce platform has been offering new products such as a Priority Lane subscription (jump the queue at the security check) for three, six or 12 months at a preferential price. Likewise, the ResaPark has now been extended to three car parks.

Launched in July 2020, the gva.boutique platform has been a success and continues to sell objects from Genève Aéroport’s centenary collection, while expanding its range with products branded, packaged and shipped by the Foyer Handicap foundation as part of the efforts of Corporate Social Responsibility (CSR).

Constantly evolving, the gva.ch site was the subject of many requests during the pandemic and recorded  a 13% increase in traffic compared to 2020 ; however, the traffic was still 28% lower than 2019. The most consulted pages relate to daily arrivals and departures, passenger reception as well as web pages disclosing information on test centres or COVID-19 – in particular FAQ pages. 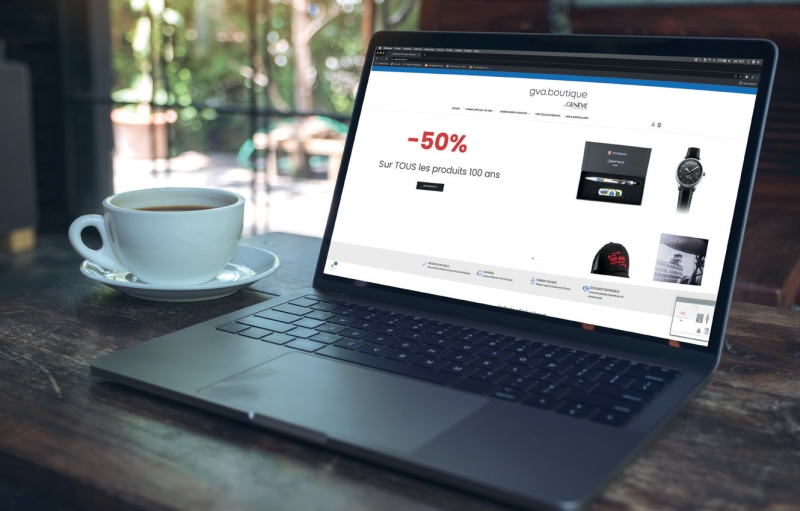 DECLINE IN TURNOVER FROM BUSINESSES RELATED TO PASSENGER TRAFFIC

The year 2021 has gone through closings, reopenings, health restrictions and this has affected the turnover of various shops and restaurants in the terminal. The summer was successful, the autumn encouraging, but with the arrival of the Omicron variant, activity fell sharply in December.

Overall turnover (shops, restaurants, car rental, display advertising, services) increased by 2.3% compared to 2020, but fell by 66.9% compared to 2019, a decrease in line with passenger traffic (-67.1%). However, this decline is not uniform and varies according to location and sectors of activity. Airside retail, for example, limited the decline (-58.5% vs. 2019), while landside business sectors underperformed.

Overall, turnover is aligned with passenger traffic, despite many points of sale and airport infrastructures being closed during the first half of the year as well as greatly reduced opening hours. It was not until June 2021 that a more sustained recovery in activity could be foreseen. All of the businesses were finally reopened during the 4th quarter of 2021.

The summer recovery was beneficial for the airport. Indeed, the average basket increased in 2021, which somewhat mitigated the effects of the health crisis. The commercial offer remained attractive. In order to follow market trends, the Duty free shop & collect concept was rolled out in collaboration with Aelia/ Lagardère (operator of duty-free boutiques) and Inflyter (innovative start-up promoting online sales). The aim is to simplify and facilitate online duty free purchases when booking a flight, with the collection of products in the boutique or in the boarding lounge. In addition, a distributor of duty free products (a first in the airport) has also been installed to allow purchases outside the opening hours of the boutiques.

From the commissioning of the East Wing in December 2021, three commercial areas were integrated into the new boarding lounges: a « Green » Duty Free, a Kiosk and a bar. The evolution of the « Aelia Duty Free » concept in the East Wing aims to integrate environmental responsibility into all aspects of a concept, in order to significantly reduce the carbon footprint of the architectural project. This is in line with the construction philosophy of the East Wing and the sustainable development values of Genève Aéroport. 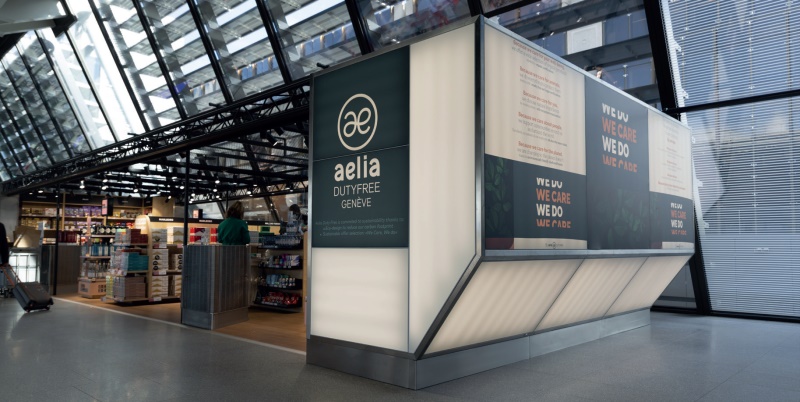 From mid-June, a new institutional campaign for shops and restaurants was rolled out throughout the terminal. New digital pictograms were displayed on the luminous screens of the terminal, on numerous digital media, as well as in various strategic places, with the aim to draw attention to the diversity of the offer. It will be accompanied over time by various activities, which had to be postponed due to the pandemic

Financial results from Genève Aéroport in 2021