Investments for the future

The pandemic that occurred in March 2020 and health decisions taken by political authorities to shut down construction sites had a very significant impact on the work in progress and investments at Genève Aéroport. For several weeks, a number of sites were brought to a halt and experienced significant delays.

After a careful review of all projects from a financial and strategic perspective, many projects planned for the 2020-2024 period have been suspended, postponed or even abandoned. From an investment perspective, facing the crisis consisted in prioritising and preserving essential operations to ensure the sustainability of Genève Aéroport in the long term.

Of the projects that have continued to move forward and those nearing completion, the largest in size is the East Wing. Interior fittings continued, with the installation of interior windows, raised floors and stone, as well as walkways. The new building commission for wide-body aircraft has been postponed to 15 December 2021 for technical reasons: due to the pandemic, the necessary tests for some equipment – particularly the gangways – could not be carried out on time.

This facility will provide additional comfort to airlines as well as passengers. For the « Airlines Night » tradition at the start of October, a tour of the facilities enabled airline representatives to take note of the advantages, both for their airlines and their passengers, of the new equipment which is close to completion.

Work continued on the new Baggage Sorting Centre, a particularly complex site. This new facility meets three requirements: replacing the current sorting system (due to obsolescence of equipment), having appropriate equipment to meet the increased needs of baggage handling, and meeting security standards by installing the latest generation scanners (EDS3) before the deadline of 1 September 2023, as set by the European Union.

Initially set for 1 September 2022, the service start date has been postponed due to the pandemic. Despite these contingencies, work is continuing in the main building and the « Cour de France ». Under the shelter of the site fences, a number of modern facilities have already taken up their final positions (new carpet lines, new check-in counters, etc.). 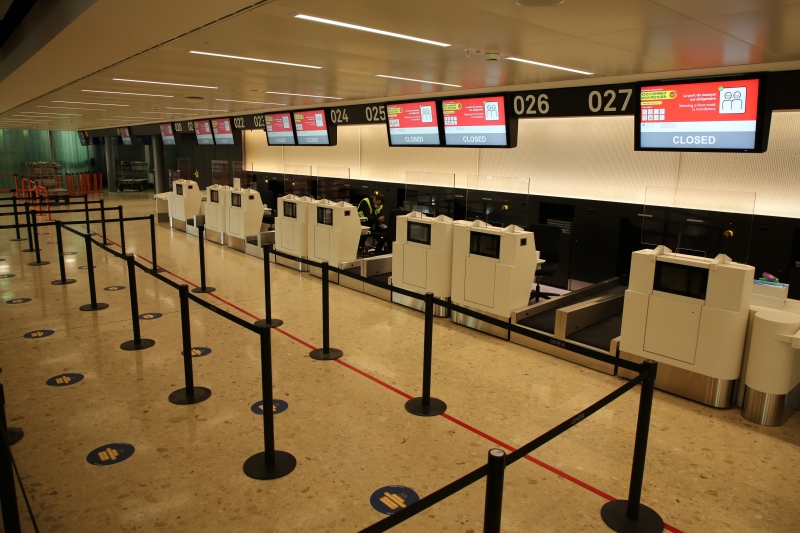 Heat pumps at the foot of aeroplanes

The installation of a central heating and cooling system (PCA-PAC) continued, making it possible to supply aircraft cabins with fresh air at the foot of gangways during stopovers. After setting up the first units around satellites and correcting early defects on some of the tubes, work has now begun on the central terminal. There are three benefits to these new installations: lower noise emissions, considerable reduction in CO2 emissions, and electricity from renewable energy sources.

The construction of the new public terrace, which started in September 2019, was completed in December 2020. Initially planned as part of Genève Aéroport’s 100th anniversary celebrations, its official opening has been postponed until spring 2021. Opening the terrace up to public use will strengthen the links between the airport and the local population, eager to watch the activity on the tarmac from an extraordinary setting.

« The official opening of the new public terrace is scheduled for spring 2021. »

In 2020, works were completed for Feeders 1 and 2, renewing all kerosene delivery pipes from Vernier tanks towards the airport, right to the foot of aeroplanes.

Following the partnership agreement signed in November 2019 between Genève Aéroport and Services Industriels de Genève (SIG) to connect the airport to the GeniLac network, the request is being examined for the approval of plans for the East thermal power plant, which will be the first infrastructure built on the GeniLac site. For Genève Aéroport, the partnership with SIG will reduce greenhouse gas emissions by 60% and contribute to the canton's efforts in the energy transition, while working towards the objective of using 100% renewable energy for the heating and cooling of all its buildings and infrastructure by 2025.

renovation of the french sector

On 1 December 2020, the sharp decrease in passenger traffic led to the temporary closure of the French Sector, enabling a plan to be put in place for renovating this space.

In spite of the crisis, Genève Aéroport is looking beyond the difficulties of 2020 to the future. On 17 September 2020, Genève Aéroport signed an Agreement of Intent with CFF outlining plans for the future multi-modal hub to be built by 2026/2027. This project notably involves demolishing the cover of the existing station and creating an easier public transport interchange platform for users, as well as several road developments. 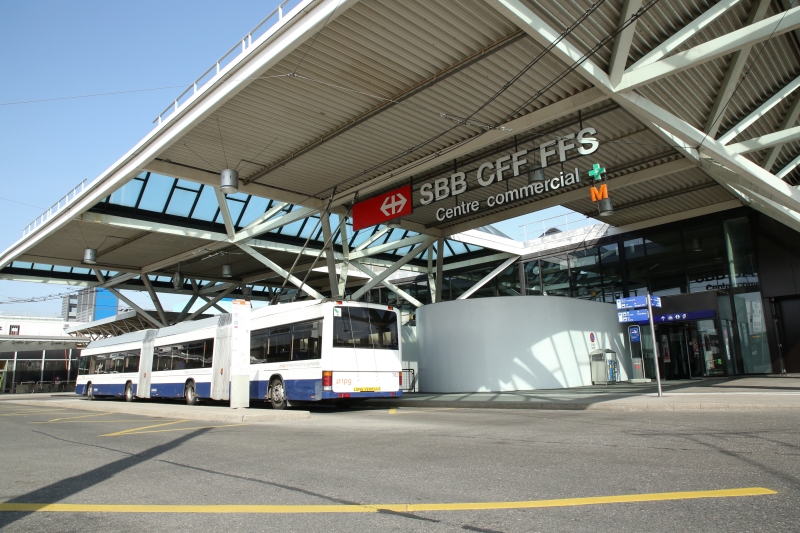 Working from home: a rapid yet profound change

When it comes to technology investments and digital projects, again, the pandemic has turned the schedule on its head and transformed the company. In the space of a few days, Genève Aéroport was fundamentally restructured so that the majority of its employees could work remotely, interacting and communicating safely from their homes. More than 500 employees – far more than anticipated in other scenarios – were able to continue their activities and carry out their missions remotely. A considerable group effort was needed to make this profound redeployment a success: expanding equipment, digitising work processes, equipping several conference call rooms, setting up webinar tools for organising video conferences to bring together up to 1,000 employees, increasing IT security and educating staff on the risks of hacking. Urgently, several new tools were also developed for the Covid Task Force, new devices linked to the crisis were prepared (for example, the acquisition of thermal cameras), the existing equipment had to be adapted, etc..

After an urgent first few weeks of the crisis and the de-prioritisation of several projects, in the second half of the year, the emphasis was placed on upgrading fundamental infrastructures and technological equipment, ensuring efficient, up-to-date equipment for the resumption of activities in 2021. In concrete terms, upgrades have been made in telephony, communications, management of aircraft movements, anticipation and simulation of noise curves, video surveillance, the parking system and the ARFF engagement system.

Over the past year, Genève Aéroport has also strengthened the security of its technological infrastructures by creating a mediation site between its various data centres.

« In the space of a few days, Genève Aéroport was fundamentally restructured so that the majority of its employees could work remotely. »

The result of a collaboration between Genève Aéroport and Skyguide, this project aims to set up a new fully digital flight plan management system (Electronic Flight Strip System) between the Goldorak and AMS towers. This holistic solution improves information flow between the two entities, particularly with the option of electronic coordination, improving air traffic safety on the Geneva site. The commission of PAGE-1 in July represented real added value for the daily work of AMS controllers. 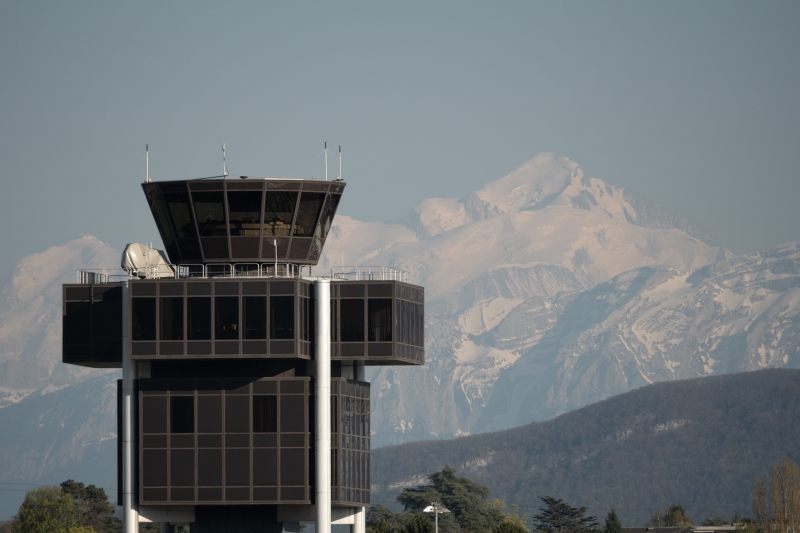 Another 2020 achievement in its final stages is the OPS control project (POPS), which will come into effect in the first half of 2021. This project will be rolled out in three stages, and has three goals: to optimise operations, to ensure the traceability of actions and events, and to simplify the management of airport operations. All information flows from the different businesses linked to airport operations will be brought together in a single tool.

Initially part of the East Wing, the automatic announcement system project is being finalised and set to be rolled out across the whole airport. The system allows for better intelligibility of messages (auditory perception) and gives an automated platform for producing voice messages. It also marks the first step in the transition to a « Silent airport » environment and better management of sound volumes.

Responsible, sustainable and committed, despite the crisis