One hundred years of Genève Aéroport! On 11 October 1919, the Grand Council of Geneva approved the building of an « airfield » in Meyrin. One hundred years later, the small Cointrin aerodrome has changed a lot.

To celebrate this incredible adventure, a team of 30 people from different departments in the airport prepared for the anniversary for over a year. Around twenty projects were set up and rolled out in 2020 with the motto « Our airport, my history ». Four hundred employees took part in a giant photo on the tarmac in April 2019, a sign of particularly strong team spirit during the preparations. Taken from an aerial lift 30 metres high, the photograph is inspired by the 100th anniversary logo. Everything was ready for celebration and excitement.

Unfortunately, the Covid-19 epidemic would prove a bit of a killjoy: around ten events had to be cancelled or postponed. However, 20 events still ran to mark this extraordinary year.

On 28 February 2020, the launch ceremony officially opened the festivities in the old terminal with Serge Dal Busco, State Councillor for the Department of Infrastructure. The terminal was adorned for the occasion with the new 100th anniversary visual identity, developed by a student from the Geneva University of Art and Design (HEAD).

In the media room, passengers could discover the documentary on the 100th anniversary of Genève Aéroport. Directed by pilot and journalist Isabelle Dufour, the documentary follows the story of the airport with anecdotes, special interviews and unpublished archive images. A larger audience were able to watch the captivating film in spring on the Léman Bleu channel, replayed throughout the year.

100 years certainly translates to images: in addition to this historic documentary, Genève Aéroport has created a postage stamp showcasing the evolution of aviation development from the turn of the century to the present day. The airport has also published a 160-page book with Slatkine Editions, following 100 years of history in previously unpublished images, archive videos and texts. More than 1,000 copies of this commemorative book have been sold in French-speaking bookstores and via Genève Aéroport's new online shop.

Various events marked this unusual year. In September, 24 flags in the colours of the airport’s 100th anniversary were adorned the Mont-Blanc bridge for a week. Soon after, the Château de Voltaire in Ferney-Voltaire hosted a photo exhibition paying tribute to the agreement signed in 1956 between France and Switzerland.

In partnership with the University of Geneva, Genève Aéroport organised two online conferences on current issues: « How can airports help fight the spread of disease? » and « Zero carbon: myth or reality? ». Always looking to the future, the airport had the honour of being the Climathon partner. Gathering virtually on 13 and 14 November, around 100 participants had 24 hours non-stop to come up with concrete solutions for local issues on the theme of the climate and the future.

On the occasion of its anniversary, Genève Aéroport would like to thank employees for their work, their commitment, and for their contributions to writing the story of the platform. The airport has given each employee a Swiss made watch, designed by a family business and decorated with references to the world of the airport.

In the end, 2020 was not as celebratory as expected. Flagship events like the Aviation Festival have had to be cancelled. Other projects have been postponed until 2021, including the Antigel concert in the noise absorber, the opening of the public terrace and the East Wing - so the celebrations aren’t over just yet. In any case, this 100th year of Genève Aéroport will always be a year to remember! 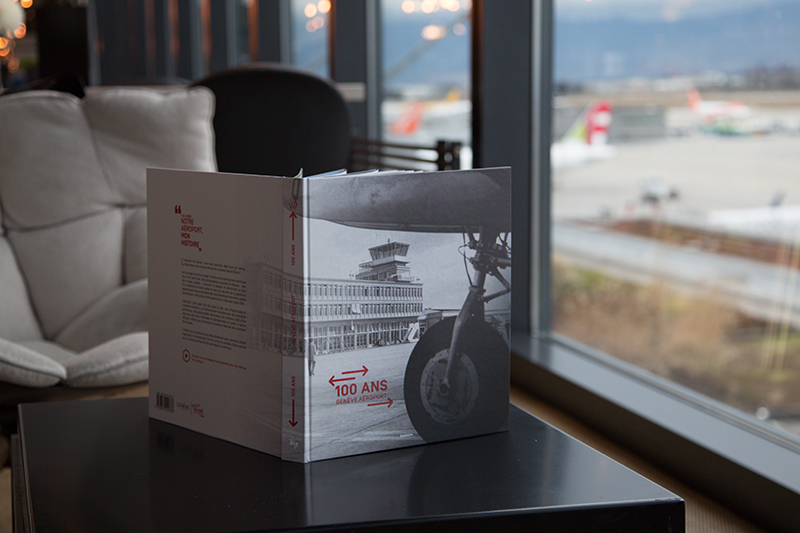 Genève Aéroport officially kicks off the festivities with a ceremony in its old terminal. The air terminal is decorated with a new visual identity and entertainment is organised throughout the airport. The motto « Our airport, my history » accompanies this year of celebrations. Around twenty events are planned. Most will need to be cancelled due to the Covid-19 epidemic. 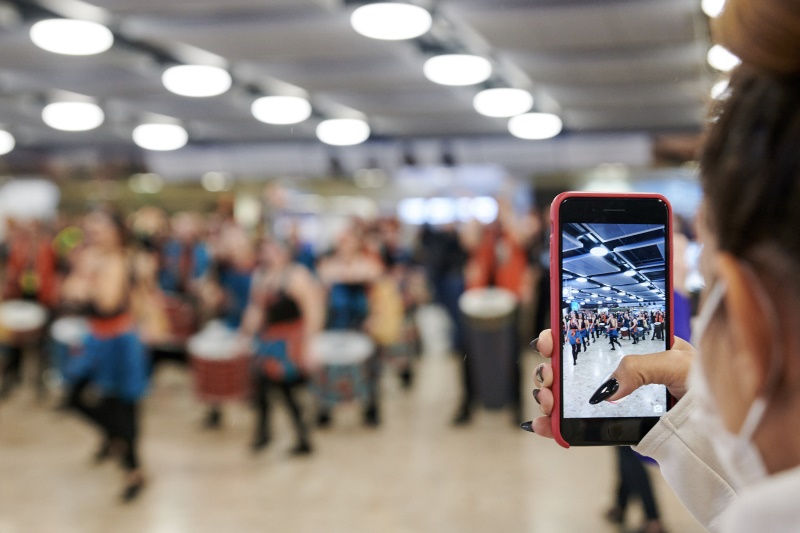 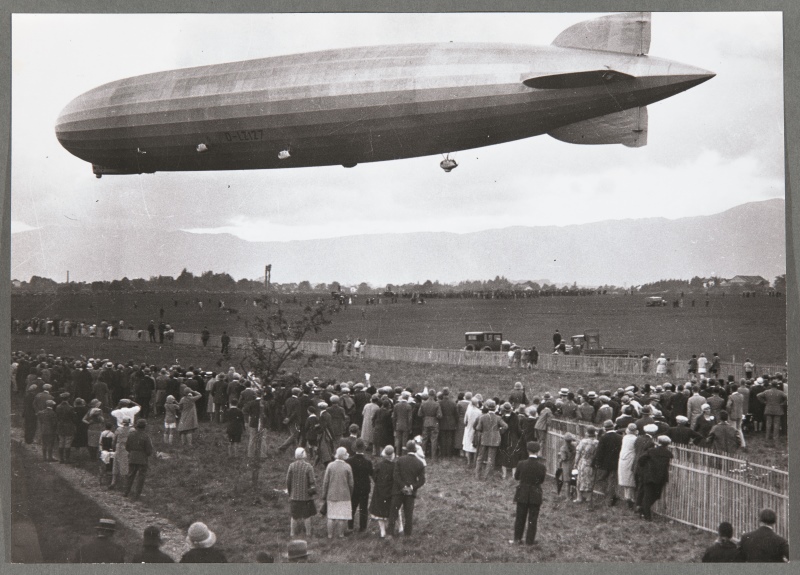 A selection of the most noteworthy archives has been made, with a view to presenting them at the various events for the 100th anniversary celebrations.

Genève Aéroport pays tribute to Kofi Annan, an iconic diplomat and secretary-general of the United Nations from 1997 to 2006, by naming its protocol lounge after him. 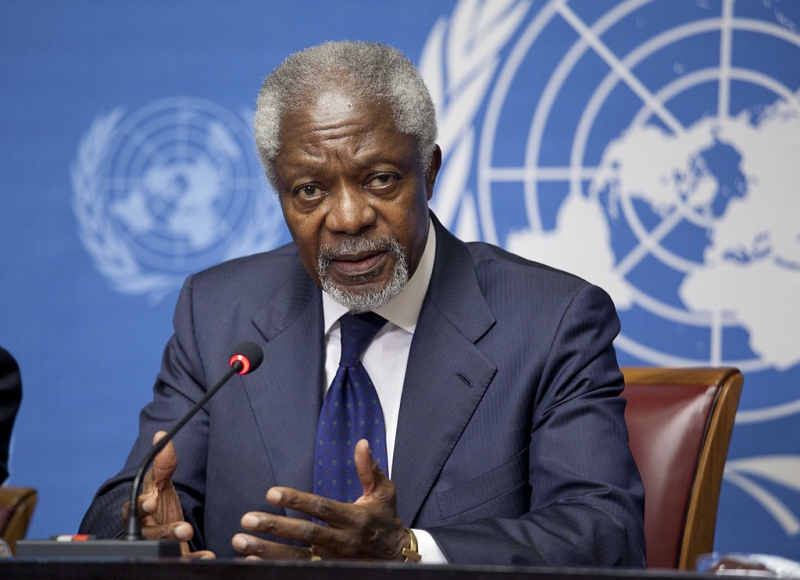 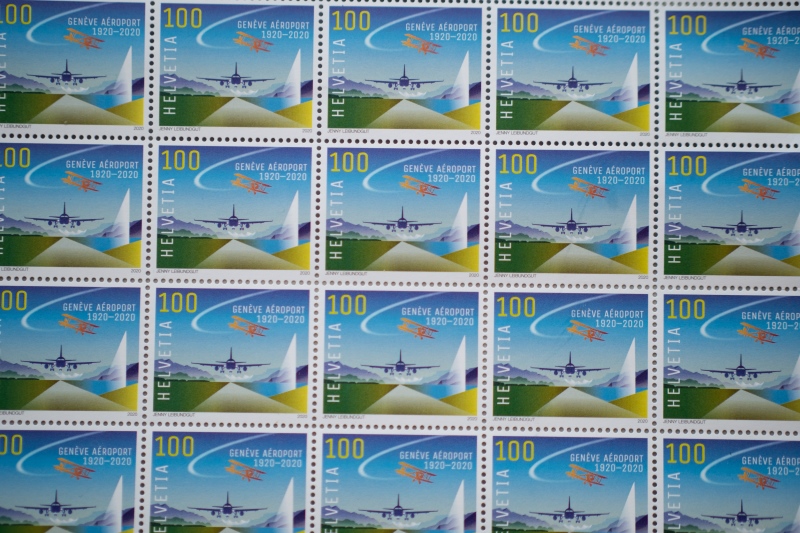 Directed by journalist and pilot Isabelle Dufour, the 26-minute documentary traces the history of the airport. 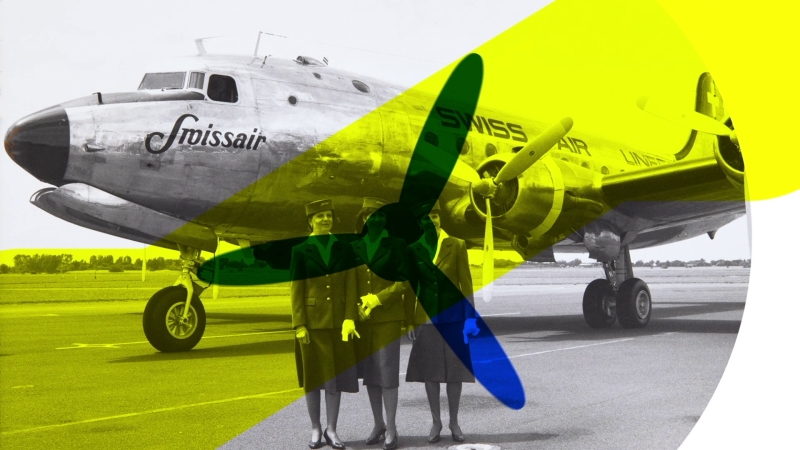 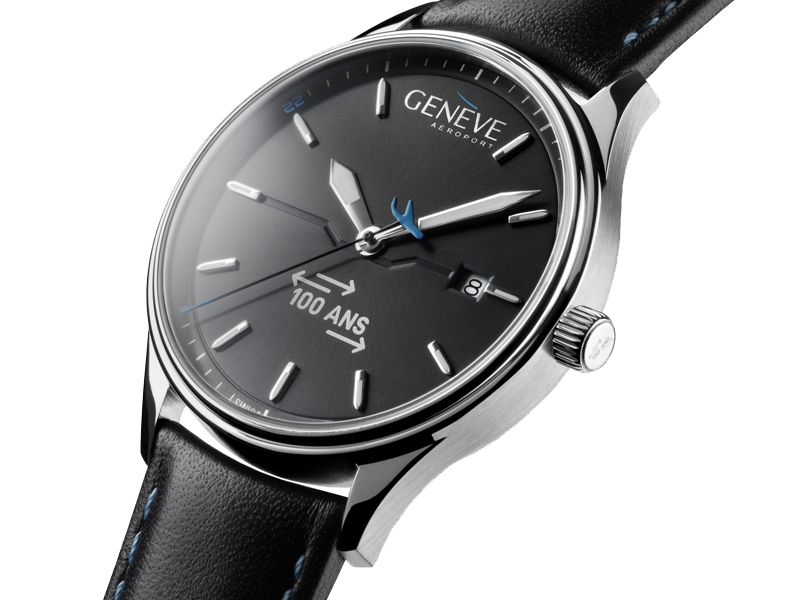 Genève Aéroport designs a limited edition Swiss-made watch, giving one to every employee.

Twenty-four flags in the colours of the airport’s 100th anniversary adorn the Mont-Blanc bridge for a week. 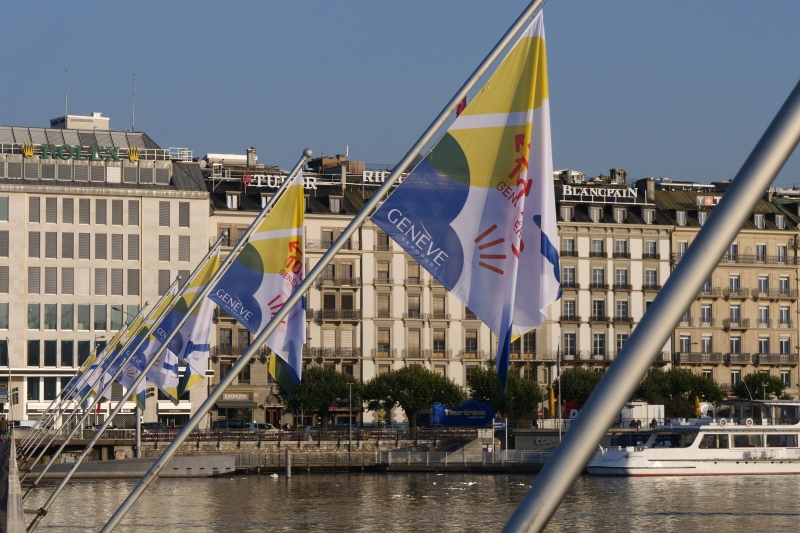 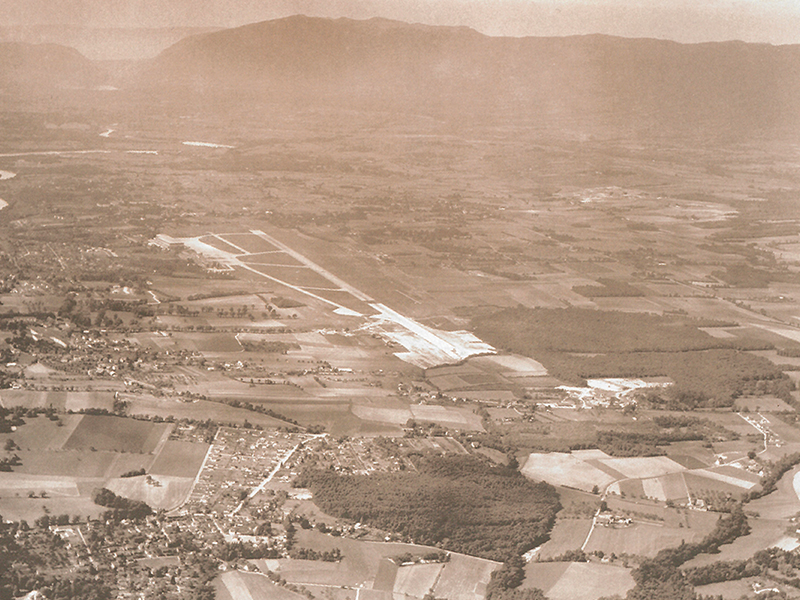 The orangery at the Château de Voltaire hosts an exhibition paying tribute to the agreement signed in 1956 between France and Switzerland.

In partnership with the University of Geneva, the airport organises a conference on a theme of the moment: « How can airports help fight the spread of disease? » with Didier Pittet, Professor at HUG, and Antoine Flahault, Director of the Institute of Global Health. 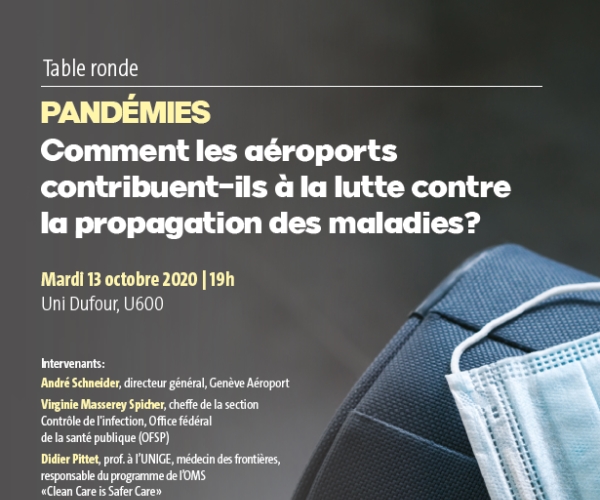 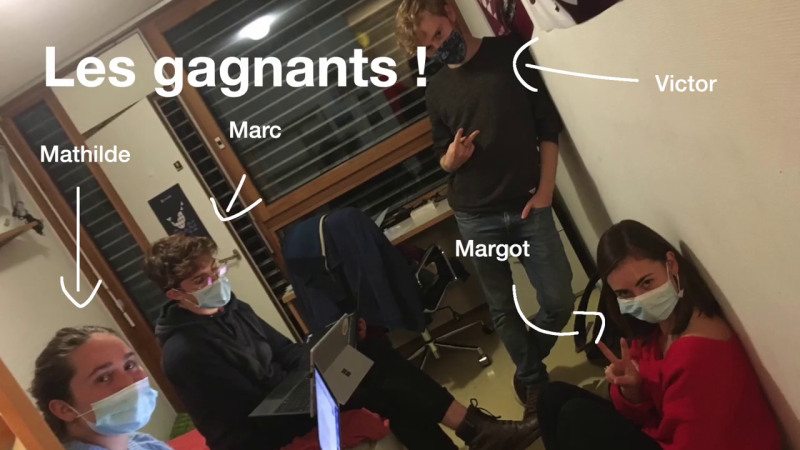 Genève Aéroport, partner of the Geneva Climathon, challenges participants to picture the airport in 2050 in just 24 hours!

The French version of the Swiss2291 book is launched! In this collection of short stories, 39 public figures including André Schneider, CEO of Genève Aéroport, imagine the Switzerland of the future, on its 1,000th anniversary. 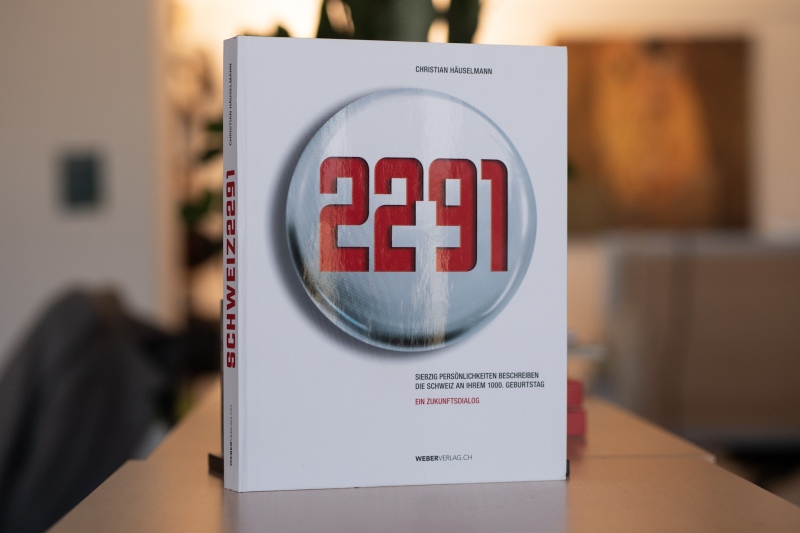 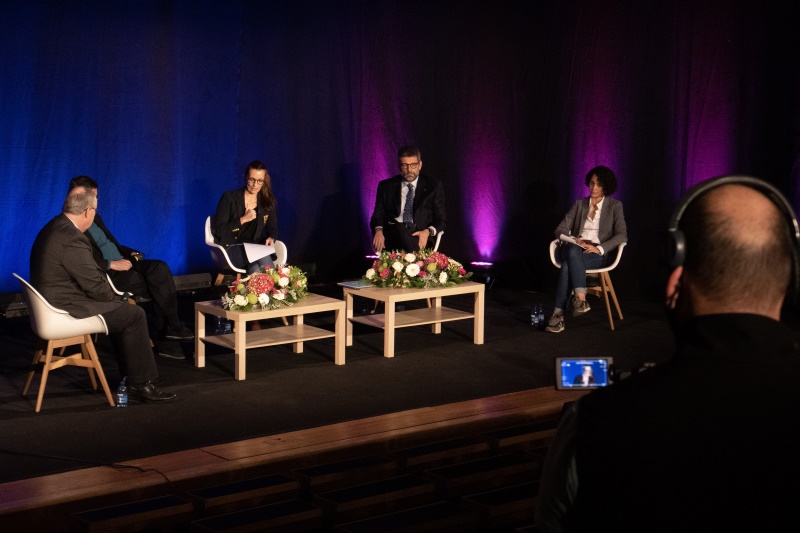 In partnership with the University of Geneva, the airport organises a conference on carbon neutrality. Will the Covid-19 pandemic slow down or accelerate the aviation response to the challenges posed by global warming?